Be Prepared, (to prevent storm damage) 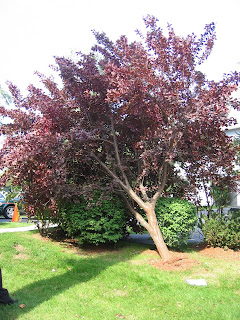 The title of this article is the motto of a well known organization, and it should be your mantra when it comes to preparing for summer storms.

The first step in being prepared for summer storms is to take an inventory of you trees. Walk all the way around large trees that are within 100 feet of your home. Do they have any unusual cracks, bark tears or mushrooms growing out of the trunk? Damage to the bark and branches could indicate internal decay that could lead to sudden failure.

Some species of trees form weak unions where branches meet the trunk. If a branch is weakly, attached high winds could tear it from the tree and cause damage to your property and leave the tree damaged and unstable. Installing support cables early can reduce the chance of a catastrophic failure. If your tree has had support cables installed in the past you should visually inspect them. If they were installed more than 5 years ago you should have them professionally inspected to make sure they are not rusted and are up to modern standards.

Do the roots show any sign of disturbance? Cracks in the soil, heaving, lifting and tilting could be telltale signs of a tree that is starting to tip over. Soil erosion and drainage problems can leave many evergreens precariously rooted and subject to wind throw.

Trees along access roads, drives, garages and out buildings should be visually inspected before storm season and after major storms. Look out for hanging branches that may become lodged in the trees crown and not be readily apparent.

Electrical services telephone and cable wires should be cleared from branches and kept away from potential tree failure zones.

Treat all wires as if they were energized with lethal voltage. You never know what may have come in contact with the wires beyond your property. Always hire a professional who is qualified to work around electrical wires.

Mature trees close to buildings can act a a conduit for lightning strikes. The science of lightning protection can protect your home and save a prized tree. Large mature trees are a valuable asset to your landscape. The investment in a properly designed lightning protection system will pay off in the short run. Trees on large rocks or in open areas are particularly attractive to lightning.

For more information on this subject or any plant health care related questions, http://treecarecanada.ca 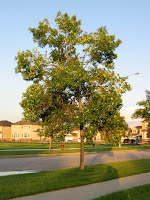 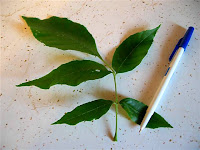 Over the years there have been many real and imagined pests and diseases that have destroyed or threatened to destroy our forests. With this in mind I was somewhat jaded when the Emerald Ash Borer was put to the top of the list as the latest threat to our trees.

Not again must have rolled off the tongues of every tree lover in .

After following the progression of this pest from infesting a few counties in the area to its current extent of five states and the , something less civil should roll off the tongue! This pest may very well turn out to be the real deal, decimating all species of ash trees in areas that it becomes established in.

Emerald Ash Borer, Agrilus planipennis Fairmaire, is an exotic pest that was introduced accidentally into in the late 1990’s. The original infestation was probably the result of green wood in the form of packing materials that originated from the beetles home range in . Whether it came from , , or is of little importance now. Logs infested with the larvae of the beetle were probably used to shore up shipping containers and were off loaded in . From there the adults, who can fly several miles when mature, found a welcome place to lay there eggs in North American ash trees.

It took several years before any one found the initial colonization and by then this prolific insect had developed a large population. The adults themselves feed on the leaves of ash trees but cause little damage. In late June to early July, they lay there eggs on the bark of ash trees usually in cracks crevices and fissures. The eggs hatch, burrow into the inner bark, the cambium layer and begin to chew their way though the vascular cambium layer in up to foot long serpentine feeding galleries. The larvae pupate and over winter under the bark of the trees and emerge as adults the following May or June. The beetles emerge from a small D shaped hole around 1/8th of an inch in size.

The tree is unable to survive the injury to its vascular system, starts to wilt and die back and will last only one to three years once infested.

The initial area of North America has now expanded to over twenty thousand square miles and includes five states and the . In the areas where the outbreak has been identified over 12 million trees have been removed in an effort to stop the spread of the Emerald Ash Borer. Official estimates in expect the prolific pest will cost 3 billion dollars in the next ten years.

Recently additional infested trees have been found further east in . Wood and wood products appear to be the primary means of transportation over long distances. Quarantines have been set up in infested areas.

Do not transport firewood from areas where the beetle is known to exist. As a measure of the severity of this threat, note that national agencies have begun an ash seed library to prevent ash tree extinction if quarantine measures are not successful.

Contact your local ISA certified arborist for up to date local information. Be on the look out for unusual die back in ash trees.