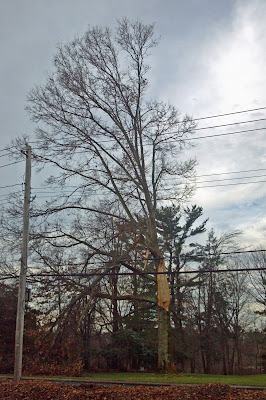 If you survived Sandy, Irene, Lee, or Ernesto, on TV or in real life you may have learned a few lessons of your own.
As a person who cares for trees daily, both in the practical and abstract sense, it was a tragic tutorial that I will not forget. I have to date not experienced the level of destruction to property nor do I expect to again. Personally we had a large oak tree slam an 80 year old masonry fire place into a pile of rubble. It was thankfully; a ways from the house and it can be rebuilt. Many people were not so lucky. I have also seen the ensuing panic that has no doubt resulted in many unnecessary tree removals in the name of safety.
All trees are at risk of failing, I want to say that right up front. As long as there is gravity, wind and the weather this will continue to be a possibility.
We live with risk every day and the key is to look at it objectively and try to minimize it where possible.
The key to mitigating risk is knowledge and preparation.
Inadvertently I participated in an experiment that yielded surprisingly predictable results. A year and several months ago on October 29th 2011, we experienced a heavy snow and ice storm that caused tremendous numbers of broken limbs. Over the next year, in several different operations, we removed the broken branches, reduced the numbers of branches, and cabled and supported all of the trees except one. That tree had a large bracket fungus halfway up its canopy where the two main trunks split into co-dominant leaders. Based on my observations that tree would have to eventually be removed.
While I was waiting for the appropriate time to remove the tree, Super Storm Sandy arrived and her 85 mph winds howled through the trees and across the rain soaked saturated soils. Not one of the trees that we had reduced the canopy, pruned broken branches from or installed preventative cables in failed. The trees that were pruned were of higher priority as they would have certainly caused damage to the house had they fallen on it.
The one tree we ignored popped out of the ground and fell like a gavel on our masonry fireplace, across the fence and into the garden.
There is a conceptual equation for accessing the potential risk presented by a tree in a landscape.
It is as follows: Risk = Potential x Environment x Target.
Risk increases if you have a potential for failure like, a weak crotch, overextended limb or cavity. If you have an environment that increases the possibility of failure like a newly exposed face or area that was previously sheltered, a wet site with shallow roots, or a change in grade due to construction. All of this means nothing if you don’t have a target like a structure or even children playground equipment. All of these elements are not created equally and it takes a trained professional to understand all the potential problems that create and reduce risk. ISA Certified Arborists have continuous training that helps them to keep up with the latest tree risk information.
Have you contacted your Arborist to review your changing landscape?
Professor Tree Tree Care Canada at 15:29 No comments: