Too Mulch of a Good Thing 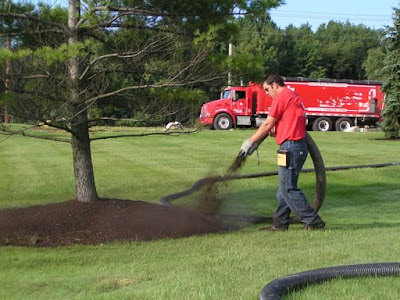 Mulch was touted as the cure for all things soil related when it first introduced in the early eighty's and has been used with much success and notable failures since. Research is currently underway to see if our current mulching practices are of benefit. To understand how mulch benefits trees we must have a few basic facts about the soil it protects.

Mulch is a protective cover for soil. Soil is an environment that contains solids, gases and liquids. As long as they are in the right proportions they work in conjunction to create the ideal habitat for roots. If they are out of proportion or not present at all they exclude roots and prevent plant growth. Too many solids and soil becomes compacted and roots can't get enough oxygen and die failing to penetrate the soil. If you have roots coming to the surface of your lawn this is the problem. If you have a high water table there isn't enough oxygen in the soil roots will be excluded. Too little water in the soil and trees and plants will dry up. If the temperatures in your soil swing wildly from hot to cold many plants will suffer root injury and possibly die.

Trees growing in the forest develop their own natural layer of mulch called “duff” this consists of many years of decaying leaves and debris that falls from the trees forming a rich insulating mat on the forest floor. The forest duff reaches a state of equilibrium decaying at a rate that prevents it from suffocating the trees that produce it.

Mulch often isn't made from the same types of trees that are being mulched. Some mulch, coming from trees that don't decay readily, like cedar mulch, can build up. Mulches made of dense materials like shredded leaves can prevent air infiltration and must be used sparingly. If mulch becomes saturated with moisture and prevents air infiltration roots will migrate in to the mulch and cause growth problems. Roots that grow into mulch will often circle the tree eventually girdling and strangling the tree. The problem is made worse by trees that are planted too deep or in pits. They are trying to grow roots out of the hole they are buried in. 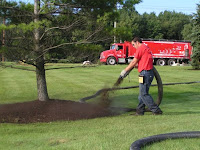 Proper mulching is an ongoing process and requires inspection and occasional maintenance. You really can't just keep adding it year after year and expect it not to have negative effects. Recent innovations in mulch delivery, namely blowing it into place have made this “ Mulch Glacier Effect” a more common eventuality. To explain, if the mulch is being deposited faster than it is decomposing it builds up into a mulch glacier and starts to move down slope! It also piles up around the trunk of the tree and starts it to decompose. Trees are made of wood, a surprise to many, and placing wet wood against it causes it to decay. 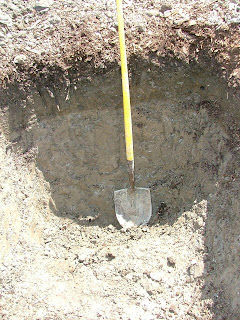 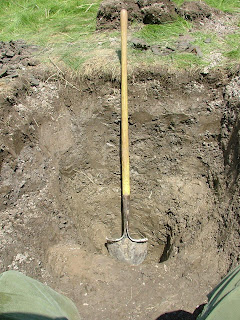 I have included two pictures that show soil profiles before and several years after a deep layer of mulch was placed on a compacted turf area. Notice the change in color and the development of rich organic loam horizons deep below the surface.

I'm still a fan of mulch applied right. Contact your ISA Certified Arborist to see if your mulch is correctly applied.