Mega deals at the mega mart lead to increases in invasive forest pests. Improvements in transportation mean that a forest pest that laid eggs in packing crates on one continent can have its offspring delivered to the other side of the world just a few short weeks later. Add one more to the list of infamy that includes the Asian long horn beetle and the emerald ash borer.

The Sirex wood wasp is the latest unwelcome guest that has hitchhiked its ways to our shores in the cargo hold of high speed container ships.

Sirex noctilo F. is a native of Europe, Asia and Africa where it is considered to be a minor pest of stressed Scots pine. When it was accidentally introduced to pine plantations in South America it was no longer a bit player in the world of forestry.

In South American pine plantations mortality of up to 80% was recorded. Most of these plantations are planted with native north American trees such as Ponderosa, jack and lodgepole pine. White pine are less affected but are subject to attack.

In North America we have at least a dozen native wood wasps. Wood wasps are typically 1 to 2 inches in length, wasp like insects and generally are black and brown in color. The Sirex wasp has characteristics that distinguish it from the native species.

Sixex adults are generally blue to blue black with the males displaying an orange mid torso. The females have large reddish yellow feet which will be black on the rear legs of the males. The antennae on both the males and females are black.

If you thing you have spotted one please contact an expert for positive identification.

The actual feeding of the larvae cause some of the damage, but a symbiotic fungus, Amylostereum areolatum that the female injects into the tree as she is laying eggs does the bulk of the damage.

The wasp completes its life cycle in one year. Adults emerge in mid to late summer and the females make an initial flight to a stressed tree. The females have been reported to travel up to 90 miles making quarantine efforts ineffective. Given that many trees are drought stressed at this time of year hosts will not be difficult to find. The female drills her ovapositors, a specialized egg laying appendage, into the bark of the tree and deposits up to 250 eggs and the symbiotic fungus under the bark of the tree. Fertilized eggs develop into female wasps, unfertilized develop into males. The larvae tunnel into the interior of the tree for up to a year. Pupae form close to the the surface before the adults emerge the following summer.

expected to have a substantial impact.

Another hitchhiking newcomer, the emerald ash borer has just been located in Toronto, Canada as it continues to spread. 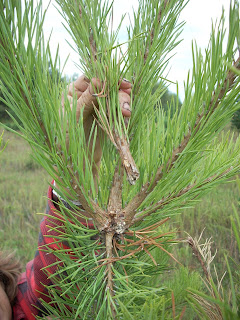 Based on your description and the photos the problem is white pine weevil Pissodes strobi .

This native insect attacks Scots pine, white pine as well as white and Norway spruce. The damage is caused when the adults lay their eggs in the upper shoots of the effected tree. The larvae feed on the area under the bark known as the cambium. This feeding disrupts the flow of sap from the shoot and results in its death. The tree seldom dies from this damage and usually ends up with a misshaped top as a result. The damaged tops resemble a shepherd's crook this is a quick visual cue that the insect is present. Young trees are usually the target of this weevil. Removing the damaged crooks, by cutting them out a little below the damage, is an effective method of controlling these pests. The ideal time to do this is early to mid July around the time wild raspberries ripen. There are also chemical controls that are effective when combined with sanitation pruning.