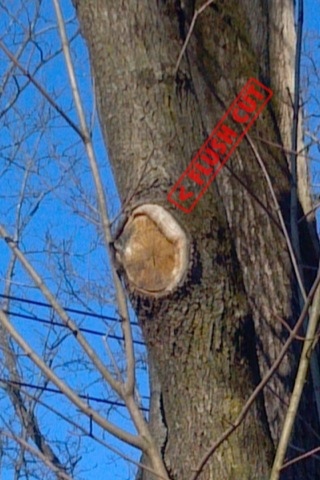 In the beginning there were flush cuts and wound paint. And the world of arboriculture was perfect. That was until someone came along, Dr. Alex Shigo, and did the research that showed that both of these practices resulted in increased injury and decay in trees. Shigo turned the world of scientific tree care upside down with the concept of “Natural Target Pruning”

The basis of this concept is that trees have evolved a biological mechanism that allows them to deal with the loss of branches while reducing the impact to the remaining tree. Trees have been losing branches for a long time, 250 million years, in the case of conifers. Angiosperms, the flowering plants, a group that contains such notable trees as, oak, elm, and ash is a group that have a fossil record dating back at least 130 million years. And they are highly adapted and extremely successful in dealing with branch loss.

The tissues of trees are at first glance are all wood, however from a seemingly uniform group of tissues specialized structures are present both macroscopically and microscopically. When trees naturally shed a branch they do so at a point called the branch collar. This point can be quite prominent on many trees and is an enlarged ring at the base of a branch. Beyond the branch collar there are only branch tissues as it marks the separation from the trunk tissues. Also at the branch collar are a group of wound wood tissues that, once a branch has been shed, form a growing callus layer that acts to cover or grow over the wound left by the shed branch. These tissues seal over the broken branch tissue and prevent the further entry of decay organisms into the trunk of the tree. Trees seal damaged wood and don’t heal damaged wood. Painting wounds with toxic paints and tars sealed decay IN the tree and prevented the tree from growing over the wound site.

Shigo also developed a model to describe the process whereby the tree prevents decay organisms that have already entered the trunk tissue from spreading. The tree sets up a set of barriers in the area where the now dead branch tissues come in contact with the living trunk tissue. This concept is called, Compartmentalization Of Decay In Trees. The CODIT concept was developed using many years of field autopsies on trees that had had branches removed. Based on patterns of decay and staining, where the tree was able to wall off decay coming from removed branches, Shigo was able to identify 4 distinct decay barriers, preventing decay from moving up, down, in and sideways in living trunk tissue. This research shed a great amount of light on what we have always been observing in trees.

Considering the amount of time we have spent in the presence of trees it is a wonder that we have only in the last century started to scientifically examine our practices in managing our beautiful co-inhabitants. Your I.S.A. Certified Arborist is up to date on the latest research and can plan and execute your next pruning project with modern scientific techniques.