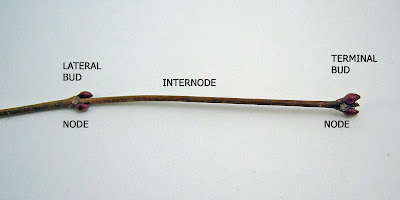 Before we continue we should have a basic understanding of a few of the terms used to describe the basic anatomy of shrubs. Buds are dormant plant parts. Inside each bud is a complete bud or flower. Buds are described based on their position on the twig. Terminal buds are located at the end of a twig and lateral buds are located below the terminal bud on the sides of the twig. Buds can be arranged opposite each other on the twig or in a zig zag pattern alternating sides along the twig. The location where each bud or group of buds is located is called a node. The piece of twig between the buds is called the internode.

As a general rule pruning cuts should take place just past the node, at a distance equal to the width of the twig. Cutting to close to the node will damage the bud and cause die back. Never cut in the middle of the internode. Cutting in the middle of the internode will result in an unsightly stub that will die back and may be an entry point for disease or insects. Two broad terms for pruning are heading back and thinning out.

Heading back is best described as when you indiscriminately reduce the size of a shrub to conform to a preset size or shape. For instance you may want to prune your carragana hedge into a 4ft by 3ft box. You would accomplish this by using a power shear to cut back the twigs in a uniform fashion. The carragana would quickly sprout a bushy broom on each tip and cover up the unsightly cuts that would result. The problem with heading back shrubs and hedges with this method is that eventually you end up with an umbrella of dense foliage at the tips of each leggy stem and little else below. Formal hedging often requires that you vary your technique by occasionally thinning out the dense canopy by cutting a series of windows in it to allow light and air to penetrate the inside of the plants.

Thinning is a more sustainable method of pruning that involves selectively removing branches back to the appropriate unions with other branches. As you can imagine this isn't done with a power shear. When thinning a hedge you need to determine your over all goal, say thin by 25% or open the hedge up every foot or so. You would then go through the hedge and cut out dead diseased and crossing branches back below the canopy by a foot or so every few feet. You would also remove healty branches back to the appropriate unions in selected locations. You could do this after you sheared it and still keep your formal look with a few small gaps. The hedge will respond by putting out new growth inside and below the existing canopy layer. Over time this method would allow you to reduce the overall size of the hedge without having it end up looking thin or over pruned.

Thinning is the method of choice when you want to maintain a shrub at a certain size and have a more natural form. When pruning shrubs in this style take a tip from your carpenter. Cut once - measure twice. You may notice that a tape measure was not included in my list of tools. You need to step back take a look at the shrub and measure with your eyes. Cut a bit and then step back and view your progress. Before removing larger branches give them a shake and see how they relate to the rest of the plant. Then remove that large branch in stages checking the form of the plant as you go. Once you have made your choice reach into the center of the shrub and cut the branch just slightly above the node of an outward facing bud. This will allow new growth to move away from the center of the shrub and avoid crowding. If you have a hole to fill in the shrub prune back to above a bud that faces the hole. Make a few cuts and then step back and have a look. Eventually you will reach a point that looks good to you then stop. If the shrub is viewed from multiple angles be sure to look at it from all sides. You can make the cuts at an angle if you wish, a clean cut at any angle is best.

Rejuvenation pruning is an extreme form of heading back that can be valuable when dealing with shrubs in mature landscapes. Over time some shrubs will become two leggy and unmanageable. You see this often in older gardens. One radical method of saving old plants is to rejuvenate them. Lilacs are the classic example of this. Lilacs need to have the older branches removed to allow the new growth to flourish. You can do this by removing the older stems back to 6 inch stubs. You leave any new shoots to take over. Typically you would remove 1/3 of the older shoots per year. In three years you will have all new shoots and a much invigorated plant. You will lose some flowers in the first few years and be rewarded with a bounty in the years to come.

A note of caution

Some plants are susceptible to diseases spread by pruning tools. Members of the rose family like cotonea aster and mountain ash should be pruned with sterile techniques to prevent the spread of fire blight. Black knot of cherry is another disease easily spread by unsterilized tools. The solution to this problem is dousing your tools with alcohol between cuts. Cut sterilize, cut sterilize and sterilize between plants.